A sparrow couple has been nesting in our veranda for over a year. The bulb was missing from the concealed light connection, and it was this little hole that they made into their home. This is where they raised two broods. Cozy and safe. 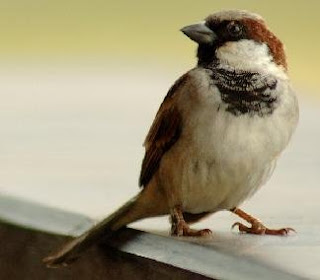 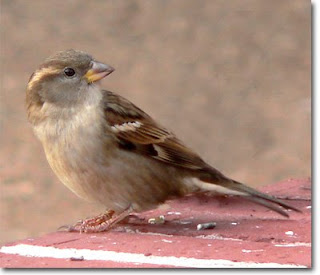 Safe, did I say? Well, they were certainly safe from the elements. Their babies were warm and unharmed in the snuggly little nest while the parents fetched food. 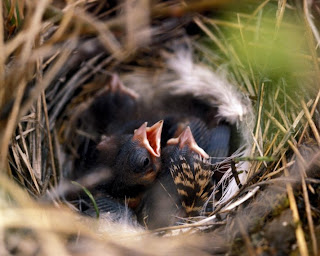 Our canine child was kept well away from the veranda - or was closely supervised - in case a baby fell down and was trodden on. 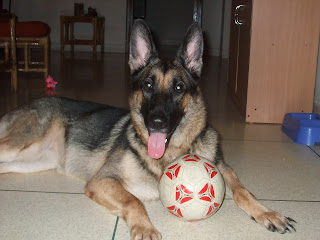 Growing up within the security of concrete walls around them, the babies grew up and one day flew away. Leaving the parents cootchie-cooing again. It was fun watching their renewed courtship. And very touching too. Sparrows are monogamous birds, and usually mate for life.
.
But we had not foreseen the disaster that was about to befall the sparrrow family in the form of our housekeeper - a sour middle aged woman called Julekha. 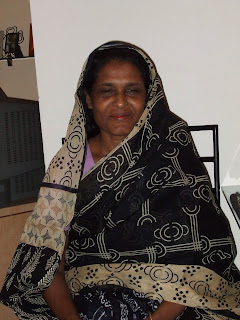 Julekha had been unhappy over the generosity shown by her employers to these house-guests (bowl of fresh water, rice kernels etc) and constantly complained about the huge mess they made with their droppings. In all honesty though, there was hardly a mess, they are such little birds! She wanted to close the hole but was deterred from doing so by us. We told her to wait until the babies had flown away.
While we were on our India trip, Julekha took advantage of our absence to firmly close up the entrance to the nest with a piece of cloth wadded into a tight ball. A few days later after our return from India (we had to fire Julekha but that's another story, and the household was in a bit of a disarray), I saw to my horror that the sparrow nest had been closed up! Opening it up unleashed another horror - a dead baby sparrow emerged followed by a dead sparrow mother!! Their bodies had shriveled and they were just beak and feathers and stiff legs! How they must have suffered in that small space, in the dark, breathing in the last bits of air, trying desperately to get out, and slowly suffocating to death!
I called down the curses of all Gods upon the head of Julekha. I am not a violent sort, but if she had been around, I would gladly have throttled her to death! An eye for an eye, doesn't it say? Justifiable homicide, in my opinion. But some would call it over-reaction, I'm sure. Anyway, I fervently hope that Julekha will suffer just such a cruel death, or at least know the fear of suffocating to death.
And every day since we uncovered the tomb, the lone male sparrow sits on the veranda rails and chirps for his partner. He goes into the nest, comes out in bewilderment, and starts chirping again. And I feel so guilty about the death of his family. The male sits on the rails, all forlorn, his feathers fluffed up, and his mourning calls to his lost partner wake us up in the morning. His calls sting my eyes with tears, and I apologize to him a hundred times a day. But nothing in the world will restore his family to him. I only hope that he will be fortunate enough to find another mate soon. 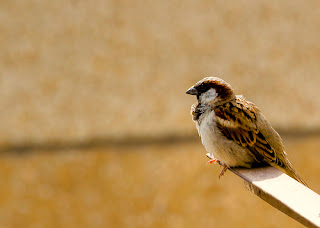 I failed to protect these birds, and I will never forgive myself. Please, dear readers, my humble request to you: if you have nesting sparrows in your home, please protect them while they are raising their brood. If they become a bother, board up the nest, but only once the babies have flown away, and please make sure you are not sealing live birds in. And please also make sure you tell your house-help and your children, that cruelty towards animals is just on on. And that we must protect the weak, and that God has asked us to be kind towards animals.
Posted by Shahnaz at 12:53

Came across your blog through Twitter! Which is fortunate/ fate! because I received an email last night about an internship in Dhaka! I will email you about it.

About your blog post - all i can say is.. we cant control everything that happens and trust me you are not to blame here. You were helpless.

We have sparrows nesting in the pipe that funnels hot air away from the stove... While they were still building the nest, we tried to discourage them from future cooking-flavoured disaster by blowing out the twigs and other birdy building materials, hoping that they'd build somewhere else. But no. Now we just leave them in peace and try to remember not to press the 'fan' button, and cook in extra heat.

Shahnaz
Bangladesh
A very average person juggling a career and a home. Bookworm, dog-lover and shopaholic (not necessarily always in this order).